Puri the spiritual land of Odisha is famous for many reasons but the prominent two are the Lord Jagannath temple and the Rath Yatra or the chariot festival. It is the only festival in Odisha that land Odisha in world tourism map. The famous car festival is one of the prominent annual festivals of Odisha that falls every year in the month of June / July. Best thing about this festival is, here every religion devotee get chance to see Lords in naked eyes, which was normally not possible inside the temple as other religion people are not allowed to see Lords within the temple. On the first day, all the three lords are coming out of the temple in their respectable newly built chariots and visit to another temple named as Gundicha temple for nine days. Nine days later, the journey is repeated in the opposite direction. If you want to enjoy this experience never give a miss to Rath Yatra at Puri. 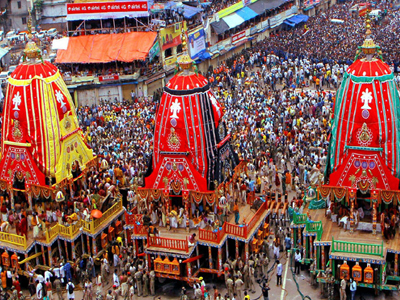 In the Puri Rath Yatra the Lord and his siblings Lord Jagannath, Lord Balabhadra and Goddess Subhadra – the deities enshrined in the Jagannath Temple, the most famous among the Temples in Puri, are carried in colorful procession every evening for 21 days to the Narendra Tank where they cruise in a bright decorated boat.

Toshali Sands offers amazing packages for Puri Rath Yatra Festival Tour for you so that you can have a hassle-free journey and accommodation in this most crowded city during that time. In gaiety and color, this festival stands next only to the Car Festival. Enjoying the Rath Yatra Tour, you can experience lots of color of this festival. On the full noon day of Jyestha (June), the Snana Yatra or the bathing festival is observed when the images in worship are actually brought out for public viewing before the festival of Rath Yatra at Puri. And you will be witnessing all this during your Rath Yatra Tour.

After the bathing festival, the deities spend 15 days in seclusion during which period they are repainted and prepared for the Jagannath Rath Yatra. The Rath Yatra of Puri is celebrated on the second day of the bright fortnight of Ashadha (June-July) and the deities are taken on a journey of around 3 Kilometers in stupendous and decorated chariots for sojourn in the Gundicha Ghar till the return Car Festival which is held 9 days later.

The chariots are made anew every year in accordance with strict and ancient specifications and are pulled by several thousand devotees at a time. In terms of splendor and fervent devotion, the Rath Yatra in puri is one of the world's most incredible spectacles.

Different Tour Packages for Puri Rath Yatra let you understand about Odisha culture and tradition and help you to have a very convenient and fruitful spiritual journey. So, go for Puri packages to achieve a great lifetime experience.