One of architectural marvel of Odisha that includes in the UNESCO World Heritage Site is the Konark Temple. It is a treasure of Odisha tourism, includes in the most beautiful and sacred temples list dedicated to the God Sun. Every year, thousands of devotees and travelers from other parts of the world come here to pay homage and explore amazing architecture of the temple. This globally renowned Konark temple was constructed by using weathered ferruginous and oxidized sandstone in 13th century on the instructions and wishes of King Narasimha Deva of the Eastern Ganga Dynasty. It was built to commemorate military successes against Muslim invaders.A perfect amalgamation of Odishan and Dravidian style architecture speak all about the Konark Sun temple in Odisha. Very close to the shoreline, this popular temple of Odisha makes the tourism popular at global level; while add another gem in the crown of Incredible India. 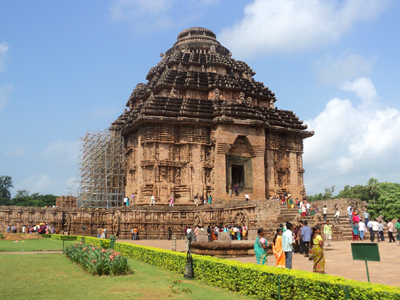 Entrance of the temple, guarded by two giant lions, leave a remarkable impression upon visitors and persuade them to speak something in the appreciation of the glorious Odisha temple. Moreover the Sun temple at Konark complex is spread in the area of 261 x 164 meters that is big enough to explore. On the other hand, the eastern entrance of Konark Sun Temple is an isolated pillared hall (also known as Bhoga Mandir) is built on a well decorated platform that is also considered as dance hall (Nata Mandira).

Interior of Konark Temple in Odisha is mind blowing that lures the attention of travelers from all parts of the world and persuade them to visit this historical Odisha temple again and again. Especially for those travelers who want to know the basics of ancient architecture of India, prefer to explore Konark Sun Temple at least once in their life. It is one a few kilometers distance from the famous Jagannath Puri temple and the Puri beach.

However, major part of the temple has converted into ruin, but traveler can see the real art of sculptures that are placed in the Sun Temple Museum. However, sculptures like military procession, hunting scenes, elephants uprooting trees, feeding young ones, men attempting to capture elephants, journeys, rows of athletes, lady cooking and more secular scenes of everyday life speak all about the rich and amazing architecture of ancient time.