Durga Puja Festival is the ceremonial worship of the mother Goddess. Durgotsab is widely celebrated occasion for reunion and rejuvenation and a celebration of traditional culture and customs. It is celebrated with a lot of enthusiasm and passion in the most parts of India. It is the most important festival of the Indian states of West Bengal and Tripura. The amount of enthusiasm and passion for the festival is more or less same in some other Indian states like Bihar, Odisha and Jharkhand.

Durga Puja in Puri is celebrated with a lot of enthusiasm abroad also, particularly in the neighboring Nepal and Bangladesh. In fact, the festival is celebrated even in many western nations especially in US and in Britain where a large percentage of the NRIs consist of Bengalis. 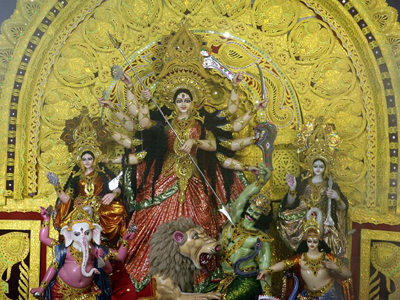 Durgotsab is an annual celebration in the month of September or October. The festivity continues for 10 days at the end of which the idols of the Hindu Goddess Durga along with other some other Gods and Goddess including Shiva, Ganesh, Kartikeya, Saraswati and Lakshmi and the demon Mahishasura, is immersed in ponds and rivers marking the end of the festival.

The last five days of Durgotsab, namely Sashthi, MahaSaptami, Mahashtami, MahaNabami and BijoyaDashami attract huge crowds. To celebrate the Puja, large pandals are erected all over India under which the statues of the Goddess Durga and others are displayed.

During the festival, West Bengal and Tripura, besides many other Indian states, boast of thousands of Pandals under which the statutes of all shapes and sizes are displayed and worshiped. In Kolkata alone over 2,000 Pandals are erected.

Durga Puja signifies the triumph of good over evil. Though it is celebrated mainly by the Hindus it is not confined to just one religion. People cutting across religious divides enjoy the ten days long religious carnival. During the Puja, they sport new outfits and avoid non-vegetarian food to pay obeisance to the Goddess.